Loose Yourself in Three Diverse Districts of Nice 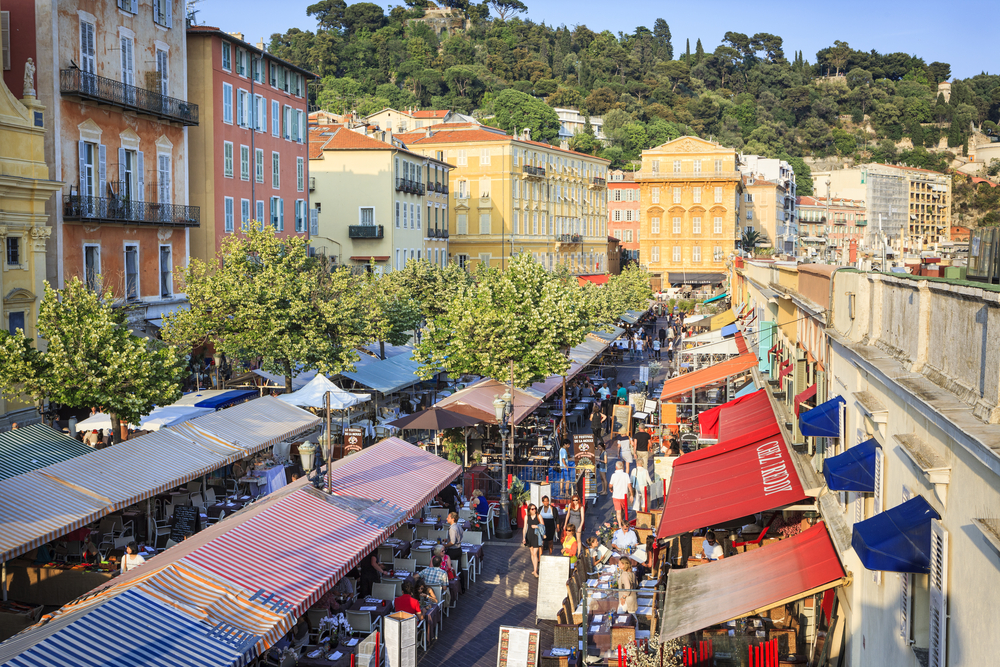 At Essential Sailing, we love the history, culture and cuisine of the places we visit almost as much as the sailing to get there. Our Captain’s Blog brings you a taste of what to expect from our luxury crewed sailing holidays around the French and Italian Riviera. In this blog we loose ourselves in three diverse districts of Nice

Cimiez is a district of luxury villas and palatial residences on the low hills overlooking the city. A monument dedicated to Queen Victoria outside her favourite winter residence, the recently renovated Hôtel Regina, serves a reminder that Cimiez was frequently visited by royalty at the turn of the century. It is still considered to be Nice’s most desirable residential quarter.

As early as 140BC, the Romans built a town on the hills of Cimiez called Cemenelum which, by the end of the 2nd century AD, had 20,000 inhabitants and was the capital of the Roman Alpes Maritimae province. The remains of a small amphitheatre (Arènes), paved streets and public baths have been excavated at the top of the Boulevard de Cimiez. A small, modern museum (Musée de Archéologie) displays the finds and illustrates the history from the Bronze Age to medieval times.

Nearby is the Musée Matisse. Both museums back on to an old olive grove that is the venue for Europe’s leading international jazz festival in July, attracting top celebrities from all over the world. At the eastern end of the grove is the Monastère Franciscain de Cimiez (Franciscan Monastery) and the church of Notre Dame de l’Assomption.

The Franciscans have used the church and monastery since 1546. Inside are two masterpieces by Louis Bréa, a leading painter of the Nice School, and an impressive carved altarpiece. A museum in the monastic buildings evokes the life of Franciscan monks in Nice from the 13th to the 14th centuries. Dufy and Matisse lie buried in the adjacent cemetery overlooking Nice.

Surprisingly, there is no château here. The city’s fortress was destroyed by the French in the early 18th century when Nice belonged to Savoy. Instead, you will find cool, shady gardens, which are particularly enjoyable in the summer with their fountains and absorbing views over the crowded old port (Quartier du Port), the gleaming, glazed tiles of the old town (Vieille Ville) and the voluptuous curve of the Baie des Anges.

It was on this imposing site that Nice originated as the ancient Greek acropolis of Nikaïa. Archaeologists have since discovered Roman and medieval remains, some of which have been housed in a tiny museum on the hill.

The best approach is up the steps on quai des Etats Unis, or by lift from nearby Tour Bellanda. Descend eastwards along montée Eberlé and rue Catherine Ségurane to the elegant, arcaded place Garibaldi, which is named after the great Niçoise revolutionary Giuseppe Garibaldi (hero of Italy’s unification) who lies buried in the hilltop cemetery.

Every morning (except Monday, which is reserved for antique dealers), this spacious, sunny square is the scene of one of France’s most famous markets. The colourful stands overflow with locally grown produce, including flowers, olives, honey, tomatoes, citrus fruits and herbes de Provence – the tastes, fragrances and colours of Provence and Italy are a veritable feast for the senses.

Arrive at dawn and you will find the Riviera’s top chefs choosing their plats du jour from the tempting food displays. During the day, it is fun to watch the world go by from the pavement terraces of the countless bars and restaurants that line the famous market, or to try a light snack from the market stalls.

Look for pissaladière (onion tart with anchovy and olives) or visit Madame Thérèse’s stall for the best socca (traditional Niçoise chickpea pancake) in town. At night, cafes and restaurants come into their own, making this one of Nice’s liveliest nightspots.